HOCKEY OLD-TIME LOGO`S: The Arena Garden of Toronto.: Hello Again, whilst researching for a book i am writing i came across this little article in a Winnipeg newspaper from 6/12/1912 it reads: R...
Posted by SLAPSHOT old-times HOCKEY at 08:24 No comments: 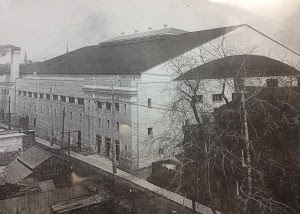 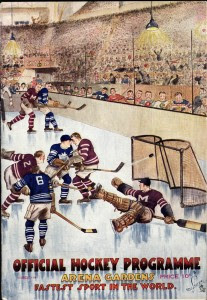 Above: The Arena.
Right: This is the programme from the final game at the Arena Gardens in 1930 Toronto Maple Leafs vs Montreal Maroons.
Posted by SLAPSHOT old-times HOCKEY at 08:17 No comments: 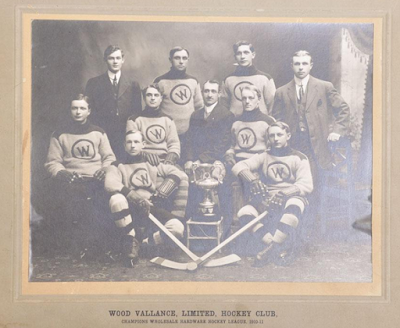 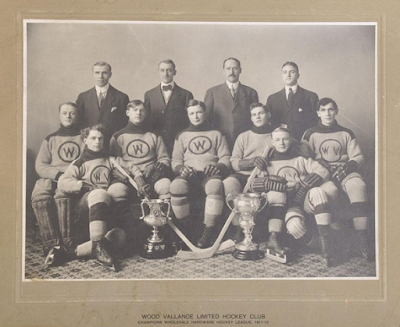 
Posted by SLAPSHOT old-times HOCKEY at 03:28 No comments: 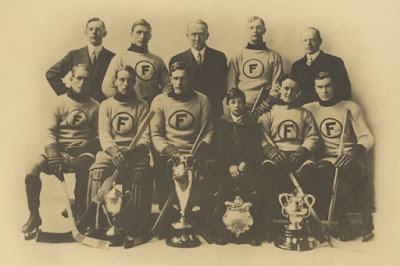 Victoria lumber merchant James M. Savage and the Canadian Colliers hockey club donated the cup. Ironically, Savage`s team would never win it.
The Savage Cup was awarded to the British Columbia Senior Hockey Champions and historically meant the winner would advance directly to the Allan Cup playoffs with the first playoff game against the Alberta champions.
Posted by SLAPSHOT old-times HOCKEY at 00:11 1 comment:

Here we have another amateur hockey team who fielded some influential players in their time.
As you may have known I am fascinated in the Logo`s teams used and how they got to pick them. In a lot of cases a hockey teams name had been copied from the towns Football or Baseball team. Many others had worn the first signs of business advertising and sponsorship.
The Boston Shoe Trades Hockey Team have been difficult to research but certainly sound like they are part of the latter, but as always I would love to hear from anyone who has any useful information about this or any other amateur team in the US or Canada.
They were known as the `Crescents` before changing to the `Shoe Trades`. They played in United States Amateur Hockey Association for three seasons 1919-22.
1920/21  USAHA         GROUP ONE         W         L         T

Raymie Skilton offered the MONTREAL WANDERERS
just one dollar to play. As the NHL team knew of his credentials playing in the AAHL the past six seasons they offered him a ONE game contract. On 21st December 1917
Skilton played his one and only NHL game it ended in a 11-2 loss against the Mighty MONTREAL CANADIENS.
Other notable players who wore the BSTC logo are
Frank Allen `RED` Synott 1890-1945 he also played in the 1920 Olympics for the silver medal winning team the USA.


Another member of the USA silver medal Olympic squad and fellow member of the Shoe Trades 1921 squad was.
Gerry (Pierce) George `Duke` Geran 1896-1981.

Gerry Geran was the FIRST player from the United States to make the NHL.
Playing four of the six games with the MONTREAL WANDERERS in the NHL`s inaugural 1917/18 season, before their arena burned down and the team disbanded.
He also would play thirty three games for the BOSTON BRUINS.
In thirty seven career NHL games he scored 5 goals and 1 assist.

Thanks once again for reading, please don`t hesitate in contacting me with any useful information.
Kindest regards,
Jeff.
Posted by SLAPSHOT old-times HOCKEY at 00:33 No comments:

My search for HELP

Anyone who has been reading my blog`s will hopefully realise how much I am fascinated in the history of the early amateur leagues and teams. I am particularly interested in the logos they wore on their sweaters.
This is the reason I ask people to share these blog`s, hoping they can reach people, especially in Canada/USA who may have information  about this fascinating time of early hockey.
Nearly every town and city in Canada and the US had at some point links with amateur hockey and the amount of teams must be phenomenal, but before these are forever forgotten about, I want to try and catalogue them. Hope you can help.
Posted by SLAPSHOT old-times HOCKEY at 22:59 No comments: 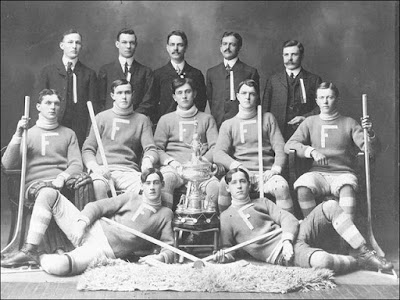 Fearman`s
In the spring of 1856 Frederick with very limited capital, set himself up as a commission merchant, and produce dealer curing pork on the side, by 1871 Fearman`s Pork were one of the most successful processing operations in the region. It is now part of the Sofina foods group.
Fearman`s is Canada`s Oldest pork processor.
Posted by SLAPSHOT old-times HOCKEY at 04:00 No comments: