My love of hockey started many moons ago, I suppose my brother David is to blame, he used to take me to watch football first and Sunderland were our team, after the game we headed back into town to the leisure centre and watch some Ice-hockey.
The home team were the Crowtree Chiefs and one of my first games were against the Billingham Bombers it was a local derby and quite a feisty game I remember. Although I seemed to enjoy watching the Chiefs I definitely saw a big difference in quality when we visited our other local team the Durham Wasps (O`Conner, Brebant, Smith`s, Crapper etc....).
The best matchups had to be against the Whitley Warriors many a time we went to see a fight and a hockey game broke out. These were memorable times and i loved travelling around the country visiting other rinks. But my love for the game cranked up a gear when Channel 5 started televising live NHL games. I was in total awe of what I was seeing, so began my fascination for this breath taking sport. I had to find out more about all of the different uniforms, logos and nicknames.
I have read masses of books and magazines and will not be getting involved in where it began or who started this game. I am interested in the hockey logo and what it represents to the fans that follow it, hence the blog. I wanted to show people the interesting logos and try to find out about other ones that could end up lost through time.
Hopefully with my readers help I can gather enough information to fill a book perhaps. I know through my research their are some great works out their already ( SIHR Sweater museum, and logo database). I want to find out about the grass roots of hockey the amateur leagues, the manufacturers leagues. Their have been thousands and thousands of these teams all over Canada and the US and I would like to find out, and record as many as I can before they are lost forever.
So PLEASE PLEASE can you share my blog and if you or you know of anyone who can help in my quest please get in touch.
I will over time bring you some more interesting teams I have found so far.
Remember I am interested in the amateur, semi-pro league teams of the 1900`s to 1950`s.
Posted by SLAPSHOT old-times HOCKEY at 23:36 No comments:

EVEL KNIEVEL and the BUTTE BOMBERS.

ROBERT CRAIG KNIEVEL. was born in 1938 in Butte, Montana. Him and his brother Nic were raised by their grandparents (fathers side) Emma and Ignatius who were second generation German-Americans.
Their parents divorced and left Montana straight after Nic was born.
Robert left school at 16 to work for Anaconda mining company, operating a diamond drill deep in the copper mines. Copper being the major industry in the Rocky mountain town of Butte. He was soon promoted to driving the huge earth moving vehicle but was soon fired when he did a `wheelie` with his monster truck after it had crashed into a main power line supplying electricity to the mining town, it knocked the electricity out of Butte for several hours.
WHAT`S IN A NAME?.
Robert was a bit of a rebel, and after a police chase that he led on a motorcycle resulted in a crash and landed him in jail. He was in a cell next to a man known as `Awful Knofel` immediately Knievel got his nickname `Evil Knievel` from his name rhyming night jailer.
After a few years he did not want to be known as `Evil` so he changed it to `Evel` a name that stuck for the rest of his life.
HOCKEY CAREER.
Robert played for the Charlotte Checkers a minor-pro team in the Eastern Hockey League before he decided to start up his own team the `Butte Bombers` in 1959 and even convinced the Czech Olympic team to play a warm up game prior to the 1960 Olympics.
As a player he was a real show-off and had to be the life of the party all of the time, former players rated him 7 out of 10 but would not trust him as far as they could throw him. Tubie Johnson another colleague said he was a good athlete but was always getting into scrapes and was the biggest bullshitter in the world.
In September 1958 at nineteen years old Knievel became the most important figure in Butte hockey. He started his own semi-pro team the `Butte Bombers`. He was owner, coach and of course starting centre, quite a remarkable string of titles for a 19 year old.
Start-up money came from his father and grandfather Ignatius and a car dealership. The local sports goods dealer Phil Judd provided Knievel with uniforms and equipment on credit, something he would probably regret later. Knievel offered players $50 per game, he put together an ambitious schedule which included semi-pro teams from the US and Canada, a few minor league juggernauts and some big name colleges from Minnesota and Michigan. Knievel was not a bad player but if he had passed the puck a bit more and not shot every time he got it, his play but have been a whole lot better. He always set himself up to be the star, putting himself on the ice for power plays, penalty killing and all the big moments as centre for the 1st line. Little self placed stories appeared in the local newspaper mentioning interest of him by other minor league teams but they all ended with how happy he was playing with the Bombers.
Knievel was hard to pin down especially when money was involved, the players soon found out that that $50 per game was a mirage but they kept playing as it was the only team around. Without the help of Phil Judd for giving Knievel credit for sticks and equipment they would of faded into oblivion but they managed to scrape by. In 1960 Robert Knievel secured the biggest coup of all when he persuaded the Czech Olympic hockey team to play an exhibition game prior to the upcoming Olympics. The game was played at the Butte Civic Arena on Feb 7th 1960, two thousand fans packed the Civic Centre. The game itself was a GOALFEST the Czechs pulverized the Bombers 22-3, the game was a rout of routs, the Butte goalie saved 69 shots. Tubie Johnson said the Czechs were just messing with us they were being kind it could have been 105-0 if they wanted.
Knievel came out during periods and pleaded for financial help from a microphone as assorted buckets were passed around the arena he mentioned that the Czech delegation was larger than he had expected and their expenses were much larger than he first had imagined.
The money was collected but allegedly none of it ever reached the Czechs or creditors. One thing for sure was that this was the end of the road for the Butte Bombers and Evel Knievels hockey career.
He was 21 years old retired from hockey, off to other interests and other projects. 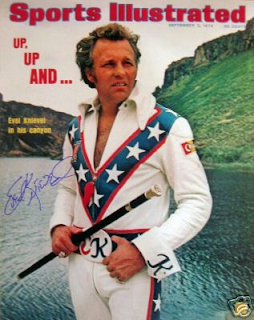 "EVEL KNIEVEL" as we all knew him attempted more than 75 ramp-to-ramp motorcycle jumps and even attempting a canyon jump across Snake River Canyon(which failed) in a steam powered rocket called the Skycycle X-2. He still holds the Guinness Record for `Most broken bones in a lifetime` which is 37. He went through 15 major operations and spent nearly 3 years of his life in a hospital bed. Robert Knievel died of pulmonary disease in 2007 aged 69. This blog is just a snippet of his fascinating story.
People of a certain age will certainly remember this toy that came out in the 70`s to represent the death defying skills of this man, and no doubt many a ramp was built out of anything you could find to try and recreate one of his jumps.
The Ideal Toy Company released the stunt cycle in 1973,and claimed between 1972 and 1977 that they sold more than $125 million worth of Knievel toys. 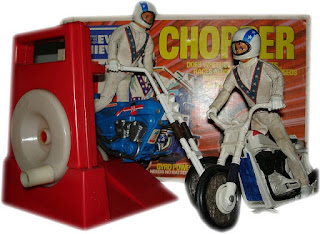 Once again I hope you have enjoyed reading this blog.
﻿﻿
Posted by SLAPSHOT old-times HOCKEY at 06:40 No comments: 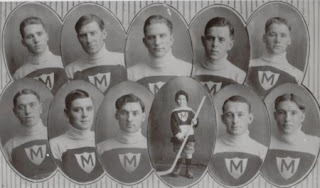 Melville was named after Charles Melville Hays the Grand Trunk Pacific Railway general manager who drowned in the sinking of the Titanic back in 1912. The STORY has it that Charles had gathered together a group of potential investors who were all millionaires and interested in helping the growth of the Township. Melville became a City in 1960.
The TRUTH has it that in 1914/15 local hockey pioneer Goldie Smith put together a senior team that won the coveted Allan Cup, the Championship of Canadian Senior Hockey, then a challenge trophy monopolized by the likes of Winnipeg, Ottawa and the Eastern Universities. Grumblings ensued that Melville must be some town of Millionaires to be able to lure players of such calibre. Goldie Smiths thinking was Hey
if that's what they think let them think it.

So the name "MILLIONAIRES" stuck.
Goldie Smiths team defeated the Regina Victorias in the provincial finals in 1915 to win the Allan Cup.

The 1915 cup winning side included Dougald Sinclair "Speed" Moynes (bottom row 3rd from left) who was known to be one of the fastest skaters in hockey at that time.
Here we have a photo of the old Queen street arena built in 1909 it was burned partially in 1946 and totally in 1962. 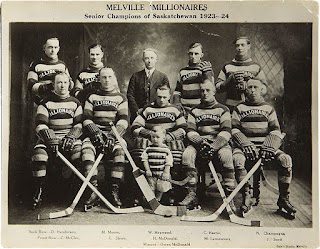 Posted by SLAPSHOT old-times HOCKEY at 00:28 No comments: