In the next number of blog`s I will concentrate on Hockey teams that have been sponsored/owned by individual companies, some will have full are part names emblazoned on their sweaters, some like this team photograph will show a more stylized logo. 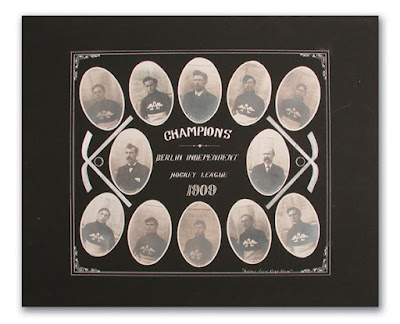 The Anthes Furniture Hockey Team had a popular style of logo during this time, the `A` of Anthes has wings.
This team photograph is from the Berlin Independent Hockey League in which they were champions in 1909. I am still researching this league but have found nothing so far, I would be extremely grateful if anybody could help me with this one.

1884: John S. Anthes purchased the Berlin novelty works and carried on business in his own name for a number of years in the manufacture of children's carriages and patent slat chairs.
1888: His factory was destroyed by fire but was immediately rebuilt on a much larger scale. He started specialising in making  high grade furniture.
1901: Went into amalgamation with sixteen other factories to form the Canada Furniture Manufacturers Ltd in which he became the director of the local factories.
1906: He resigned as director and went into partnership with J.C. Breithaupt under the name of the Anthes Furniture Co.
1920: Management of the company was taken over by Baetz Bros.
1965: The Anthes-Baetz Furniture Co was officially formed.
1967: Anthes-Baetz purchased by Farquharson-Gifford Ltd of Stratford, Ontario.
purchased by Princeville Furniture Inc of Princeville, Quebec.
1982: Anthes-Baetz merged with Hentschel Clocks Canada and became Hentschel-Baetz Ltd.

The Anthes Furniture name had been around for nearly a 100 years.
Posted by SLAPSHOT old-times HOCKEY at 23:18