Here we have the logo for the Chicago Baby Ruth hockey team, unfortunately like so many of these amateur hockey teams it is extremely difficult to find pictures showing their logos.
This was one of the main reasons my starting these blogs in the hope of getting information. So if you have anything that could be of interest please contact me.
Both the Baby Ruth and the Butterfinger teams played in the Chicago Amateur hockey association  during the 1930`s.
The teams must have been sponsored by the makers of the two candy bars Curtiss Candy.
The Curtiss Candy company was founded in 1916 by Otto Schnering near Chicago, Illinois. The first candy made was "Kandykake" later refashioned in 1921 as the log- shaped "Baby Ruth" their second confectionary item was the chocolate covered peanut butter crunch "Butterfinger" which was introduced in 1931. 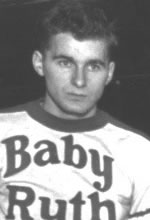 Posted by SLAPSHOT old-times HOCKEY at 09:54